An impressive effort from both of our invitational Elite 7s teams as they faced established teams on the summer sevens circuit at JF7’s on Saturday 30th July 2022.

At Wimbledon RFC both teams held their own in the group stages, the men winning 3 from 3 to reach the quarterfinals, and the women finishing top four heading straight to the semi-finals.

The men’s quarterfinal was a tough encounter but a late score took the team through to the semi-final against Assassins who unfortunately ended our run in the competition.

The women worked tirelessly in the final against a well drilled SA Wild Dogs side, in the heated contest it was our competitors that came out top dog.

A mighty effort from the first outing of our Elite Women’s 7s side.

A double win for Rugby Against Cancer and a fantastic event for everyone on Saturday 23rd July 2022.

Thank you to our hosts Petersfield Rugby Club, and to our guests Pacific Islanders Rugby Club!

And a huge thank you to our professional ambassadors, special guests, volunteers and everyone who came down to a smashing day of rugby and fundraising!

A big thank you to former Exeter Chief Matt Jess who held a top-quality coaching session before he puts on his boots to play in the Men’s fixture during the Pacific Islanders Rugby Club Sequel Match.

It was a scorcher on Saturday 17th July at Surrey 7s for our Women’s Hummingbird 7s side.

The Women came runners up in the plate final, narrowly missing out against Nomad 7s. 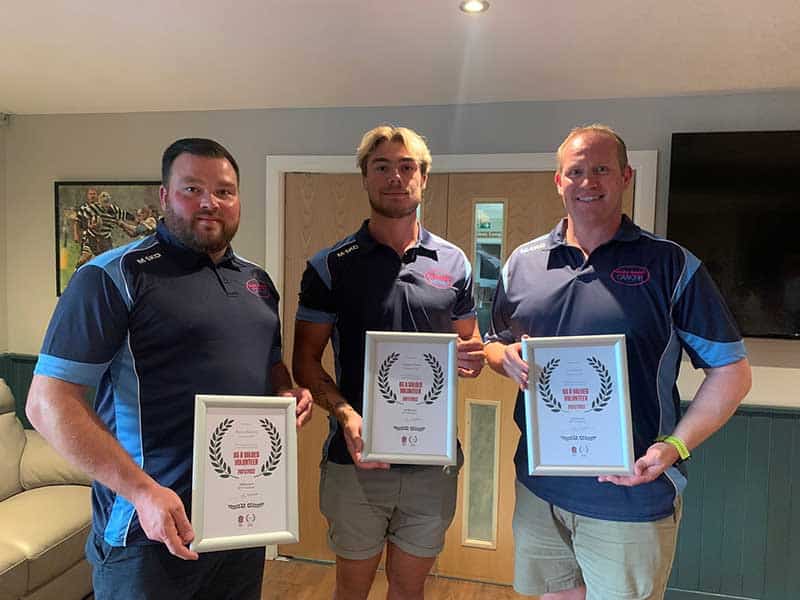 Rugby Against Cancer were invited to a friendly against Honey Badgers Rugby Club at Portsmouth Rugby Club as part of the Platinum Jubilee celebrations in June 2022.

Rugby and Charity were the winners on the day!

Thank you to Paul Clark for the images.

A glorious sunny British evening saw Barracudas score 193 in 20 overs, with Rugby Against Cancer scoring an honourable 143 for 5 in return.

Over £500 was raised yesterday, thank you to all who came down to play and support the evening. As always charity is always the winner. Thank you to Locks Heath Cricket Club for hosting.

We’re still buzzing at our achievements at the Floodlit7s this year. To get to the final and beat the hosts and high placed Nat 1 side, a side from the winners of Nat2South and a National team that plays on the World Rugby 7’s circuit. Then, at the final hurdle, with only 9 players able to take the field in the game, losing the to the title to Ealing Trailfinders Academy.

Following this we’ve now had invites to further 7s tournaments, 10s tournaments as well as having offers of support and sponsorship for the charity. Absolutely amazing and our aim to raise awareness of the charity was achieved.

Our ambassadors filled their baskets with eggs and have delivered 100s of smiles this Easter with sweet treats across the UK.

Thank you to everyone who donated to make this possible and we hope the patients and staff enjoy the gifts!

Easter Weekend + Sunshine + Rugby = a tremendous Good Friday. Thank you to everyone who went to Portsmouth Rugby Club this easter to play, volunteer or support The Decider 2022.

Win, lose or draw… Rugby Against Cancer was the winner!

A fantastic day at Lee-on-the-Solent Golf Club taking part in the P3 Mortgage (our playing shirt sponsor) first golf day.  Thank you for inviting us along to play 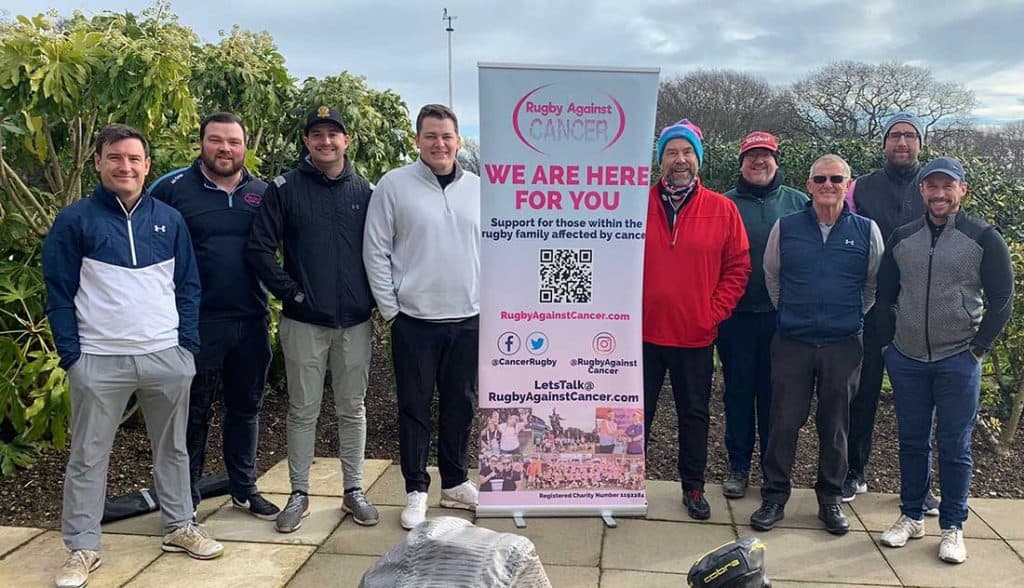 An absolutely fantastic day for rugby at Old Deer Park! 🏉 Rugby Against Cancer Men’s team started 2022 with a bang as they faced London Welsh Select XV in our first match of the year. At half time the team were 17-10 behind the hosts, but the team came fighting back from half time with a huge team effort to secure the win 24-39!

Success on the field, and success off it as the support team spread awareness of our charity, rallied new players for future matches and raised a whopping £1,797.93 in donations. 🔥💥🔥💥

Thank you to everyone who was involved in playing, coaching and cheering on our magnificent team this weekend! And a big thank you to our hosts for inviting us to play and join in their England v Wales Experience Event!

Over 1,000 pairs of Rugby Against Cancer’s brand-new blue and pink rugby socks were worn by players across Hampshire and Sussex for the charity’s first-ever Sock Day!

The Sock Day 2022 initiative was about creating further awareness about the important work we are doing as a charity and to encourage those who need help to reach out for support.

On Boxing day, we held our annual festive fun fixture – The Hangover Cup 2021!

Thank you to all those who took a break from their festivities to come play in the cold and mud – we raised £120!

BACK WITH A BOOM

The Back with a Boom Event saw Rugby Against Cancer face Pacific Islanders Rugby Club at Petersfield Rugby Club.

Thank you to everyone who attended, played and supported, we raised an epic £10,000! Thank you to our hosts, Petersfield RFC!

Well done to every person who was involved in the event and thank you to all those volunteers who gave up their time to ensure the event ran smoothly! 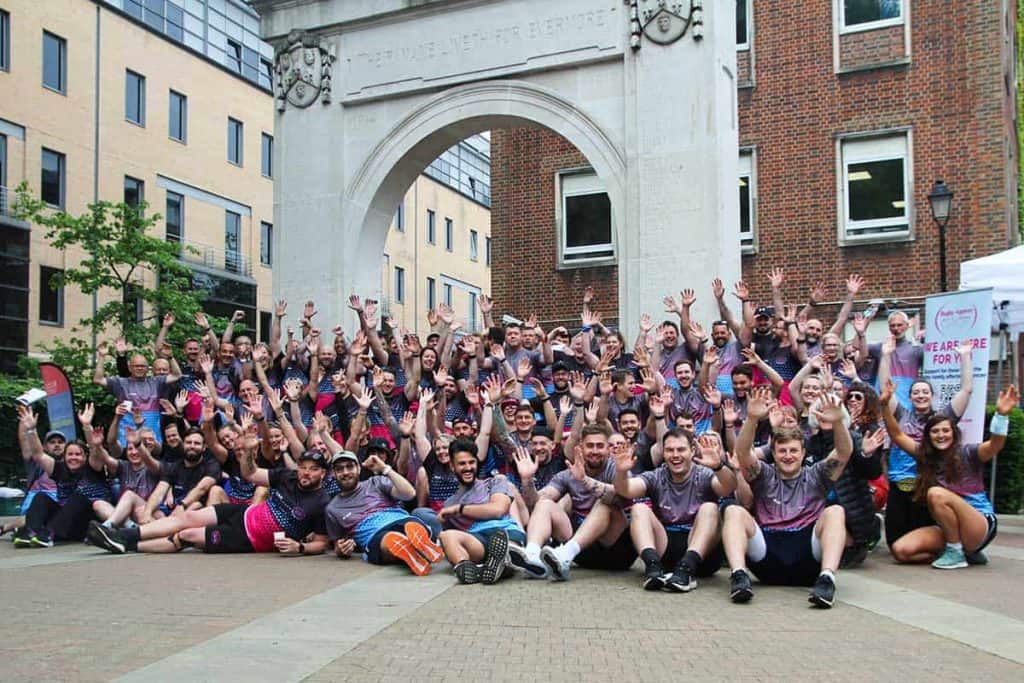 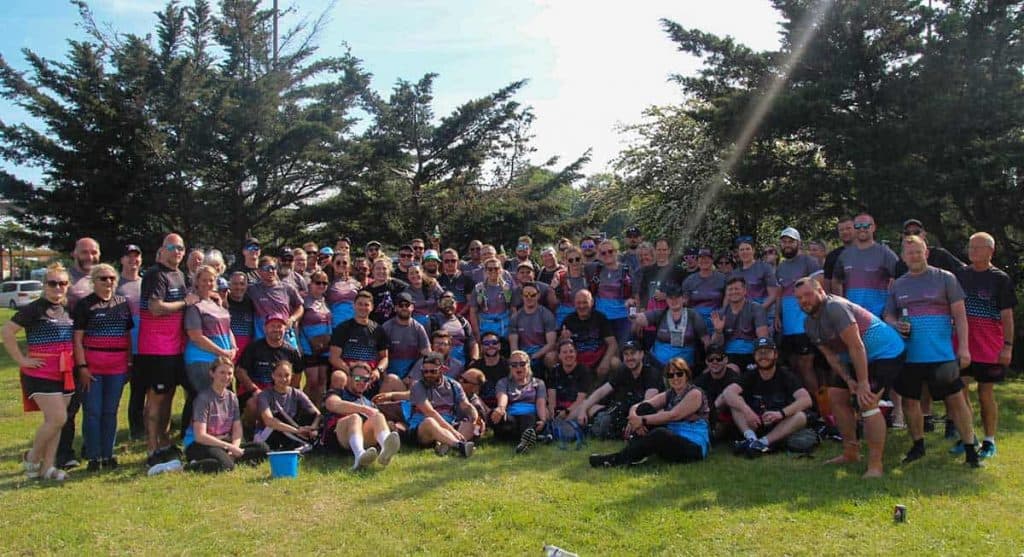 For Easter 2021, we asked our Champions to nominate hospitals to receive an Easter delivery. Thanks to the generosity of our followers we raised £551 which was split between the four hospitals; 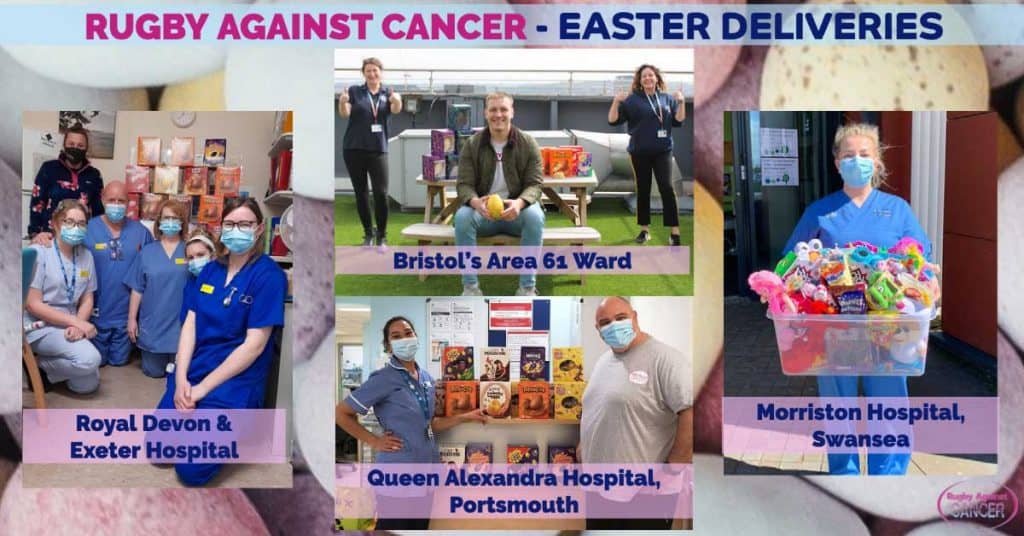 The Rugby Against Cancer Mo Team raised a fantastic £1,680 towards men’s health.

Your donation could help save a father, a brother, a son, a friend, a partner, a man’s life. DONATE

The pots have been shaken, the cash donations have been counted and the GoFundMe page is now closed!

That draws the curtains on this year’s Trek 2 Twickers!

We want to say a massive thank you again to everybody involved, everybody who donated and everybody that helped us reach a MASSIVE £19,106!!

67 miles in 27 hours, walking from Portsmouth to Twickenham to attend the Army V Navy fixture. We raised an incredible £9700 for Prostate Cancer along the way.

There were many emotions and some tough times throughout but what an experience it was. We at Rugby Against Cancer thank every person who took part.

Some of the Rugby Against Cancer team featured on BT Sport’s Rugby Tonight show in January 2019 alongside special guest Saracens, Alex Goode.

On Friday 16th November Rugby Against Cancer took on The Army Masters at Aldershot.

Raising funds and awareness for the cancer charity ‘Bloodwise’.

With the going heavy and the conditions misty, the team RAC team availed themselves to the challenge and put on a determined effort but losing 80-20 but raising £553.41