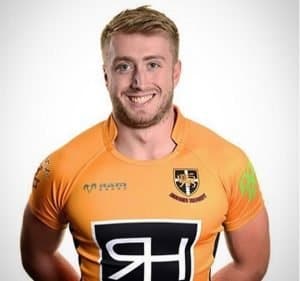 I was diagnosed with Stage 4 Hodgkin’s Lymphoma in July 2020. Initially I had been at a small rugby training session when I felt a sharp shooting pain in my lower back which left me unable to stand or sit up. An ambulance was called, and I was taken into hospital, my initial thoughts were that I must have slipped a disc in my back from lifting the weights in the session.

That night I had multiple scans and was on a lot of painkillers so it’s still a bit of a blur. When I woke the morning after I was taken for a CT scan whilst the doctors were trying to work out what was going on. I was still in the mindset that it was a slipped disc. A few more scans later and they then told me they had suspicion that there was a form of cancer but were unsure what kind. This took me by surprise and initially, laying in hospital I just felt angry. Why me?

I then had a small biopsy followed by a PET scan. This confirmed that it was lymphoma. After a few more tests I was diagnosed with Hodgkin’s Lymphoma, and I was under the impression it had been caught early. But clearly – I was wrong – it was stage 4. After the initial shock had subsided my next thought was “right, I’m going to beat this.”

I’ve had plenty of support from family, friends, my teammates who have helped me through this. A special thank you to Tony Mitchell that runs AquaTone rehabilitation. Over the last 8 months, throughout lockdown and in between my chemo treatment, he gave me the opportunity to train one-on-one with running and exercise sessions in the hydro pool. This helped me maintain my fitness levels gained from rugby and importantly, helped keep my mind focused. We are now training back on the pitch.

Another great charity that got in touch is Rugby Against Cancer, they do amazing work supporting those in the rugby community, players and families of those affected by cancer. From my own experiences growing up playing rugby at Esher Rugby Club, it becomes your extended family. To have a big group of brothers supporting me all the way through treatment has been huge! Just knowing that there’s easily 50 lads at the end of the phone there to listen and pick you up when things get too much, really makes a difference. For that I am thankful!

Treatment has gone really well; my last chemotherapy session was mid-April. A big thank you to the NHS.

Times have not been the easiest the past year, but I’ve had all the support I’ve needed. Hopefully all the scans after this are clear and then I’ll be back properly just in time for pre-season!